2 weeks until Chuck and I move into our new apartment!!!!!

Walking distance to everything.
2 storeys
Love it.

it's hard to believe that september is only a couple months away. this time last year me and chuck were talking about when we're gonna try for another baby in september. honestly the place we are right now I don't see that happening anytime soon! as much as it pains me to say there's no way we can bring another life into the world right now.

Just got back from the Arden family cottage, which is in Ottawa on lake Johnson. Most beautiful place ever! Got to see my uncle Ron and aunt Joan and cousins Adam and Michael who I literally see once a year if I'm lucky. Some days I wish we were able to live closer :( so this visit was extra special because my aunt M her hubby and there 4 kids were there and also my aunt K, her hubby and there son.

So there lots of people and it was great company.

I think the highlight of my weekend was when my cousins and dad saved two baby raccoons. One that had fallen in the lake and one that was so scared it had it had its head under a rock. So Adam, because he thinks he is macho went in and grabbed the one baby out of the water, while trying to get his dog from attacking it all at the same time . That was kind of traumatizing, not going to lie lol

Then there's Michael who apparently thinks he is a raccoon whisperer, got bit. Tiny little teeth mark, but still lol his calmly saying "shhh stop it" didn't work lmao.

Adam got them both out, and put them in the Woods, were I just keep telling myself that their mommy found them and they left into the forest. Which truthfully prob didn't happen :(

Its been a couple weeks since ive blogged... Lost my voice for acouple weeks I guess and couldn't find something to write about.

I (until last night) was a Co admin to a group that a friend of mine made, a "mom" group. Some where to discuss topics and ask questions. Which I thought was a great idea!
Until like most groups someone had to ruin it for everyone else.  Shoving there opinions in peoples faces, putting down other parents and there childs developments.

For someone to have the NERVE to put down someone else's child is.disgusting. Every child is different for you to think putting down there child/parenting skills is okay just because you put "IMO" (in my opinion) doesnt make it okay.

Why do people compare me to a trucker? Or sailor?

I'm sorry that I speak my mind and that curse words are part of my vocabulary... And yes ill be the first to admit using them doesn't phase me anymore which I'll agree it probably should, but id be lying if I said it did.

But because I swear doesn't mean my points are any less true. Im blunt, sometimes to much but I like it that way. I don't do it to hurt any ones feelings. Believe me that's never my first intention. But I don't see the point in being fake with people.

So how I see it, you want my opinion then you want my actual opinion. So don't get mad at me when I give it to you. If you don't want it, don't ask me for it.

Chuck has agreed to move to clarington. I couldn't be happier!
It will be so much easier finding a place :)

I have replied to a couple ads today, but what im really waiting for is the newspaper tonight.

Can I just say how much I love bath time now. Well other than the facy that its a battle for ethan to let me wash his hair. But its so much fun now to see him play in the tub, he is such a water baby just like his momma :) I feel like bath time is such a bonding experience. 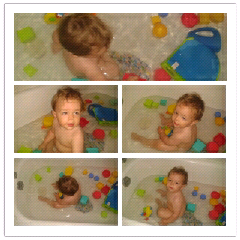